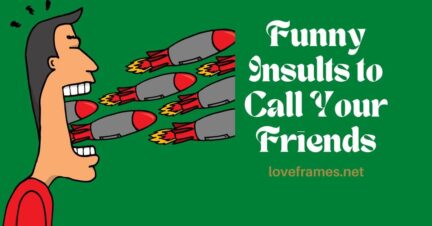 Funny Insults to Call Your Friends: A fun and harmless method to inject some comedy into a friendship is to use witty insults as a way to playfully taunt or joke with pals. However, it’s crucial to keep in mind that everyone has different senses of humor and boundaries, so you should take care to avoid offending or hurting anyone with your jokes and insults.

When it comes to resolving disputes and disagreements, it’s also crucial to employ humor with the awareness that it should never take the place of open, honest conversation.

Being able to think of hilarious insults on the spot might be challenging, so I’ve put up a list of some lighthearted, offensive-free, and non-insulting nicknames and jokes you can use with your pals. So, if you want to spice up your conversations with your pals and make them more enjoyable and humorous, think about using some of these witty insults.

Funny Insults to Call Your Friends

Non-offensive, insulting but funny nicknames to call your friends.

“The grand master of sarcasm”

“The master of puns”

“The king/queen of corny jokes” 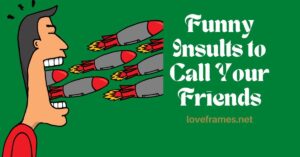 Related: Best Friendly Insults Ever in 2023

Funny Situational Quotes to Use When Talking to Your Friend

He has Van Gogh’s ear for music. – Billy Wilder

Prince Charles’s ears are so big; he could hang-glide over the Falklands! – Joan Rivers

I always wanted to be somebody, but now I realize I should have been more specific! – Lily Tomlin

Thank you for sending me a copy of your book; I’ll waste no time reading it. – Moses Hadas

He has delusions of adequacy. – Walter Kerr

His execution? I’m all for it. – Calvin Coolidge (about a singer’s musical performance)

You can lead a man to Congress, but you can’t make him think. – Milton Berle

His mother should have thrown him away and kept the stork. – Mae West

# I am enclosing two tickets to the first night of my new play; bring a friend if you have one. – George Bernard Shaw to Winston Churchill,

Cannot possibly attend the first night, will attend second… if there is one. – Winston Churchill to Bernard Shaw

# He has never been known to use a word that might send a reader to the dictionary. – William Faulkner speaking about Ernest Hemingway.

# Woman: If you were my husband, sir, I’d give you a dose of poison!
Man: If I were your husband, I’d take it.

We were happily married for eight months. Unfortunately, the marriage lasted four and a half years. – Nick Faldo

In the land of the blind, the one-eyed man is king. – Unknown

The thing that impresses me most about America is the way parents obey their children. – King Edward VIII

Funny Nicknames for Friends as per the Characteristic

This is as it is collected from the blog Humoropedia.

Coma. He’s your most boring friend.

Businessman. He’s your friend who’s always busy on the phone.

Minion. He’s your friend who’s too quick to obey someone.

Slim Jim. He’s skinnier than anyone else you know.

Mr Meow. He loves cats too much. 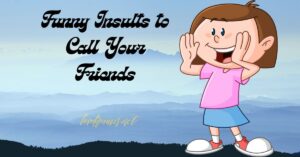 Yawner. He wants to take a nap all the time.

Chaired. He always wants to lead but rarely succeeds at that.

Timebomb. He always bursts out in anger.

Book Zombie. He’s your friend who often prefers to read a book instead of going out.

Jarganotor. He’s using too much jargon.

Wikileaks. He can’t keep a secret.

Sir Google. Whatever you ask him, he tells you to Google it.

Barbarians. He’s your least civilized friend with the worst hygiene.

Cutie-poop. She’s cute but not quite as perfect as the perfect poop.

Light from my butt. Don’t you think the light from your butt is super-cute?

Peanut-poop. She’s cute like a peanut but she also poops quite a lot.

Poop-babe. She’s cute but she smells. Maybe she should take a professional wiping class.

Miss Sweetie Butt-Head. Her butt is too sweet for human words but she’s a little butt-headed.

I found this funny humiliating insult to one of your best friends taken from Pun Me.

No, I’m not insulting you, I’m describing you.

It’s better to let someone think you are an idiot than to open your mouth and prove it.

If I had a face like yours, I’d sue my parents.

Your birth certificate is an apology letter from the condom factory.

I guess you prove that even god makes mistakes sometimes.

The only way you’ll ever get laid is if you crawl up a chicken’s ass and wait.

You’re so fake, Barbie is jealous.

I’m jealous of people that don’t know you!

My psychiatrist told me I was crazy and I said I wanted a second opinion. He said okay, you’re ugly too.

You’re so ugly, when your mom dropped you off at school she got a fine for littering.

If I wanted to kill myself I’d climb your ego and jump to your IQ.

You must have been born on a highway because that’s where most accidents happen.

Brains aren’t everything. In your case they’re nothing.

I don’t know what makes you so stupid, but it really works.

Your family tree must be a cactus because everybody on it is a prick.

I can explain it to you, but I can’t understand it for you.

Roses are red violets are blue, God made me pretty, what happened to you?

Behind every fat woman there is a beautiful woman. No seriously, you’re in the way.

Calling you an idiot would be an insult to all the stupid people.

You, sir, are an oxygen thief!

Some babies were dropped on their heads but you were clearly thrown at a wall.

Why don’t you go play in traffic?

Please shut your mouth when you’re talking to me.

I’d slap you, but that would be animal abuse.

They say opposites attract. I hope you meet someone who is good-looking, intelligent, and cultured.

Insults to Call Your Friends Funny and Humiliating

Stop trying to be a smart ass, you’re just an ass.

The last time I saw something like you, I flushed it.

I’m busy now. Can I ignore you some other time?

You have Diarrhea of the mouth; constipation of the ideas.

If ugly were a crime, you’d get a life sentence.

Your mind is on vacation but your mouth is working overtime.

I can lose weight, but you’ll always be ugly.

Why don’t you slip into something more comfortable… like a coma.

Shock me, say something intelligent.

If your gonna be two faced, honey at least make one of them pretty.

Keep rolling your eyes, perhaps you’ll find a brain back there.

You are not as bad as people say, you are much, much worse.

As an outsider, what do you think of the human race?

Just because you have one doesn’t mean you have to act like one.

We can always tell when you are lying. Your lips move.

Are you always this stupid or is today a special occasion?

I have neither the time nor the crayons to explain this to you.

#1. What to say when someone insults you?

The following strategies may help you to respond in a very positive manner to a friend who insults you in a funny manner.

It’s critical to keep in mind that you have a right to respect and compassion and that it’s unacceptable for someone to use cruel or offensive language while speaking to you. Setting limits and responding to insults in an assertive manner are acceptable. It’s also crucial to remember that not everyone will agree with you or like you, and that’s great; you don’t have to win everyone over.

Here are a few strategies that you can use to help you let the insult roll off your back and not let it affect you:

It’s crucial to keep in mind that developing the capacity to overlook insults takes time and practice. Keep in mind that everyone has bad days, and it’s conceivable that the person insulting you isn’t intentionally attempting to hurt you—rather, they’re just having trouble managing their own emotions. It’s still acceptable to set boundaries in these circumstances, just do so without being as aggressive.

A pleasant and amusing method to joke about with your buddies is to phone them with witty insults. It’s crucial to keep in mind, however, that these insults should never be used to mock or harm someone’s feelings. Instead, they ought to be employed as a means of cheering up people and cementing friendships. When employed properly, hilarious insults may be a playful and enjoyable method to express your friendship and love for your pals.

You Makes Me Laugh Quotes and Amazing Puns