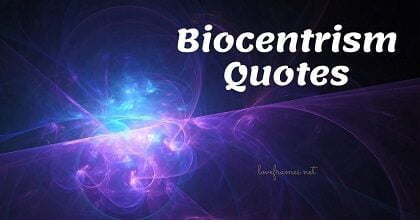 Biocentrism quotes: Biocentrism in simple words is an ethical philosophy that maintains that all life is morally equivalent and deserving of the same respect. Although many religious traditions contain elements of biocentrism, Western philosophy ethics did not approach the subject in a systematic way until the latter half of the 20th century.

Principles of Biocentrism are explained in detail here  REFERENCE.

Selected few quotes on biocentrism are collected from the internet for ready reference.

Nature is painting for us, day after day, pictures of infinite beauty. — John Ruskin 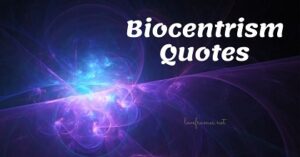 Intelligence is the ability of a species to live in harmony with its environment. — Paul Watson. Biocentrism quotes!

As the biocentric view suggests, the garden prospers when control is balanced by equal measures of humility and benevolence. A balance is struck. Control, servitude, respect, imagination, pragmatism, an ecological conscience, compliance, and a certain measure of mysticism and altruism all meld together to provide nurture. — Jim Nollman

Our linear concept of time means nothing to nature. – Robert Lanza

Without consciousness, space and time are nothing. – Robert Lanza. Biocentrism quotes!

We take for granted how our mind puts everything together. – Robert Lanza. Biocentrism quotes!

In whatever form it takes, life sings because it has a song. The meaning is in the lyrics. – Robert Lanza

Death is simply a break in our linear stream of consciousness. – Robert Lanza. Biocentrism quotes!

Time is not an absolute reality but an aspect of our consciousness. – Robert Lanza. Biocentrism quotes!

Nothing exists unless you, I, or some living creature perceives it, and how it is perceived further influences that reality. Even time itself is not exempted from biocentrism. – Robert Lanza

The universe bursts into existence from life, not the other way around as we have been taught. For each life there is a universe, its own universe. We generate spheres of reality, individual bubbles of existence. Our planet is comprised of billions of spheres of reality, generated by each individual human and perhaps even by each animal. – Robert Lanza

When you turn from one room to the next, when your animal senses no longer perceive the sounds of the dishwasher, the ticking clock, the smell of a chicken roasting – the kitchen and all its seemingly discrete bits dissolve into nothingness – or into waves of probability. – Robert Lanza

The laws of nature are structured so that we grow and change, and get to experience the full spectrum of biological existence. – Robert Lanza

That’s absolutely correct and in addition to that life just isn’t an accident of the laws of physics. There’s a long list of experiments that suggest just the opposite. – Robert Lanza

Physics tells us observations can’t be predicted absolutely. Rather, there’s a range of possible observations each with a different probability. – Robert Lanza

Amazingly, when you add life and consciousness to the equation, you can explain some of the biggest puzzles of science. – Robert Lanza. Biocentrism quotes!

Nothing exists unless you, I, or some living creature perceives it, and how it is perceived further influences that reality. Even time itself is not exempted from biocentrism.  — Robert Lanza

We have failed to protect science against speculative extensions of nature, continuing to assign physical and mathematical properties to hypothetical entities beyond what is observable in nature. – Robert Lanza

In fact when you combine stem cell technology with a technology known as tissue engineering, you can actually grow up entire organs, so as you suggest that sometime in the future you get into an auto accident and lose your kidney, we’d simply take a few skin cells and grow you a new kidney. In fact this has already been done. – Robert Lanza

Our science fails to recognize those special properties of life that make it fundamental to material reality. This view of the world – biocentrism – revolves around the way a subjective experience, which we call consciousness, relates to a physical process. It is a vast mystery and one that I have pursued my entire life. – Robert Lanza

I think it’s science and physics that are just starting to learn from all these experiments. These experiments have been carried out hundreds and hundreds of times in all sorts of ways that no physicist really questions the end point. I think that these experiments are very clearly telling us that consciousness is limitless and the ultimate reality. – Robert Lanza

Any universe that could have preceded consciousness only existed in a probability state. – Robert Lanza. Biocentrism quotes!

Until we recognize the essential role of biology, our attempts to truly unify the universe will remain a train to nowhere. – Robert Lanza. Biocentrism quotes!

I think the answer of course is that space and time are not these hard external objects. Again we’re, scientists have been building from one side of nature (physics) without considering the other side (life in consciousness). Neither side exists without the other. They cannot be divorced from one another or else there is no reality. – Robert Lanza

So for instance it becomes clear why space and time and even the properties of matter itself depend on the observer in consciousness. In fact when you take this point of view it even explains why the laws of the universe themselves are fine tuned for the existence of life. – Robert Lanza

So someday in the near future hopefully rather than having a foot or a leg amputated we’ll just give you an injection of the cells and restore the blood flow. We’ve also created entire tubes of red blood cells from scratch in the laboratory. So there are a lot of exciting things in the pipeline. – Robert Lanza

Our science fails to recognize those special properties of life that make it fundamental to material reality. This view of the world – biocentrism – revolves around the way a subjective experience, which we call consciousness, relates to a physical process. It is a vast mystery and one that I have pursued my entire life. – Robert Lanza