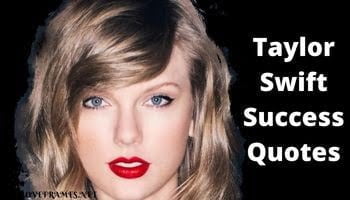 Life isn’t how to survive the storm; it’s about how to dance in the rain. – Taylor Swift

Just be yourself, there is no one better. – Taylor Swift.

Life is a ruthless game unless you play it good and play it right. – Taylor Swift

I’ve always strived to be successful, not famous. – Taylor Swift 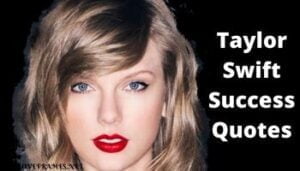 Fearless is getting back up and fighting for what you want over and over again…even though every time you’ve tried before you’ve lost. – Taylor Swift.

Just being a human being, I’ve realized that before every big problem you can create for yourself, before every huge mess you have to clean up, there was a crucial moment when you could’ve just said no. – Taylor Swift

There are no rules when it comes to love. I just try to let love surprise me because you never know who you’re going to fall in love with. You never know who’s going to come into your life – and for me, when I picture the person I want to end up with, I don’t think about what their career is, or what they look like. I picture the feeling I get when I’m with them. – Taylor Swift

People haven’t always been there for me, but music always has. – Taylor Swift

You can’t have a better tomorrow if you keep thinking about yesterday. – Taylor Swift

We don’t need to share the same opinions as others, but we need to be respectful. – Taylor Swift

We were built to fall apart and fall back together. – Taylor Swift.

The lesson I’ve learned the most often in life is that you’re always going to know more in the future than you know now. – Taylor Swift

Inspirational Taylor Swift Quotes To Take A Leap In Life

“There’s two ways you can get through pain. You can let it destroy you, or you can use it as fuel to drive you; to dream bigger, work harder.” – Taylor Swift

“I think fearless is having fears but jumping anyway.” – Taylor Swift.

“Here’s what I’ve learned about deal-breakers: If you have enough natural chemistry with someone, you overlook every single thing that you said would break the deal.” – Taylor Swift

“Sometimes the person you’d take a bullet for is the person behind the trigger.” – Taylor Swift

“Happiness and confidence are the prettiest things you can wear.” – Taylor Swift.

“As your career grows, the list of things that make you happy should not become smaller, it should become bigger.” – Taylor Swift

“Even if it ends badly, it’s worth it if it made you feel something, it taught you something.” – Taylor Swift.

Taylor Swift Quotes about Life to Choose The Exact Path

“Just be yourself. There is no one better.” – Taylor Swift

“You are not the opinion of someone who doesn’t know you.” – Taylor Swift.

“Knowing who you are and being independent and strong, will be attractive to the right guy.” – Taylor Swift

“So don’t you worry about your pretty little mind, because people throw rocks at things that shine.” – Taylor Swift

“Anytime somebody tells me I can’t do something, I want to do it more.” – Taylor Swift.

“Now more than ever, we need to be good and kind to each other. And don’t judge each other – and just because you have the same taste in men, we don’t hold that against each other.” – Taylor Swift

“We don’t need to share the same opinions as others, but we need to be respectful.” – Taylor Swift

“I think every girl’s dream is to find a bad boy at the right time, when he wants to not be bad anymore.” – Taylor Swift

“One thing I’ve learnt is not to change who you are, because eventually you’re going to run out of new things to become.” – Taylor Swift

“The only words you’ll regret more than the ones you left unsaid are the ones you use to intentionally hurt someone.” – Taylor Swift

“It’s so devastating to come to terms with speaking of someone in the past tense, when you used to see them as your present and your future.” – Taylor Swift

I always aspire to just be really nice to people. To be kind. – Taylor Swift

Never ever compare yourself to the beautiful girls. There’s always someone gorgeous who will make you feel like you’re not. It’s a total confidence buster! – Taylor Swift

Silence speaks so much louder than screaming tantrums. Never give anyone an excuse to say that you’re crazy. – Taylor Swift

There are two different categories of love. The first category is called a fairytale. The second category of love is called just another lesson. – Taylor Swift

In school if you’re different that’s uncool. But I try to maintain confidence in who I am…because…you know…I don’t really want to change it. – Taylor Swift

Be good to people. Be good to every single person you come into contact with. My best friends are great musicians. But more than that, they’re great people. – Taylor Swift

And all we are is skin and bone. Trained to get along. Forever going with the flow. But you’re friction.

It’s you and me, there’s nothing like this, Miss Americana and The Heartbreak Prince. Taylor Swift Success Quotes

Wasn’t it beautiful running wild ’til you fell asleep? Before the monsters caught up to you? Taylor Swift Success Quotes

You can hear it in the silence. You can feel it on the way home. You can see it with the lights out. You are in love, true love.

And then the world moves on, but one thing’s for sure. Maybe I got mine, but you’ll all get yours. Taylor Swift Success Quotes

Don’t treat me like some situation that needs to be handled. I’m fine with my spite and my tears, and my beers and my candles.

You call me up again just to break me like a promise. So casually cruel in the name of being honest. Taylor Swift Success Quotes

You can plan for a change in the weather and time, but I never planned on you changing your mind. Taylor Swift Success Quotes

My thoughts will echo your name. Until I see you again. These are the words I held back. As I was leaving too soon. I was enchanted to meet you.

Never forget the essence of your spark! – Taylor Swift.

Happiness and confidence are the prettiest things you can wear. – Taylor Swift.

I never want to change so much that people can’t recognize me. – Taylor Swift.

You have to be happy with who you are and the choices you make. If you don’t like yourself, you’ll never be truly happy. – Taylor Swift

I want to make the most of this cultural relevance or success or whatever you want to call it, because it’s not going to last. – Taylor Swift

Don’t make High School everything. Because if high school is everything, you’ve got a long life to live. And…I like to think that the best years of my life are still ahead of me. – Taylor Swift

The cool thing about reading is that when you read a short story or you read something that takes your mind and expands where your thoughts can go, that’s powerful. – Taylor Swift

We never painted by the numbers, baby. But we were making it count.

Your faithless love’s the only hoax I believe in.

They told me all of my cages were mental. So I got wasted like all my potential.

You had to kill me, but it killed you just the same.

You drew stars around my scars but now I’m bleeding.

You showed me colors you know I can’t see with anyone else.

I felt like I was an old cardigan. Under someone’s bed. You put me on and said I was your favorite.

August slipped away like a bottle of wine because you were never mine.

I’m not your problem anymore . So who am I offending now? You were my crown, now I’m in exile, seein’ you out.

Only twenty minutes to sleep, but you dream of some epiphany. Just a single glimpse of relief to make some sense of what you’ve seen.

We were both young when I first saw you.
I close my eyes and the flashback starts:
I’m standing there
On a balcony in the summer air.

See the lights, see the party, the ball gowns,
See you make your way through the crowd,
And say, “Hello.”
Little did I know…

Taylor Swift has shared many wise words about success throughout her career. She emphasizes the importance of hard work, perseverance, and staying true to oneself. She also highlights the importance of not letting fear or doubt hold you back and to always strive to be the best version of yourself.

Her quotes serve as inspiration and motivation for anyone looking to achieve success in their own lives. Whether you’re an aspiring musician or just looking to achieve your personal goals, Taylor’s words remind us that success is possible if we stay true to ourselves and never give up on our dreams.